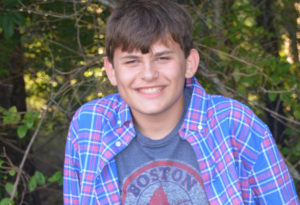 Have you ever been to a book store and noticed the same book can have multiple different cover designs? My favorite book, The Poetry of Robert Frost is one such example. One cover shows a black and white photo of Mr. Frost looking pensive. Another is bland—no photos just the title in a traditional font. The third is a picture of a fork in the road representing Mr. Frost’s famous poem “The Road Less Travelled”. At face value these three designs imply a different idea to an uninformed reader. Someone may miss out on some of the most important work in the last century because the cover of a book was not representative of the strength and brilliance of what is inside.

I feel this same idea is analogous to how we, as humans, measure or create a narrative about someone based on a quick, or sometimes less than quick, cursory interaction. This can be crushing to someone like me with non-speaking autism and an unreliable body. I can easily be passed over as either an obscure scientific oddity or as a book written in a language few understand. I believe both of these covers may tell part of my story but only the first chapter.

My world is filled with many things that are out of my control and by any reasonable standard could be considered devastating. However, both subjectively and objectively I have a lot to be happy about. In fact, I have felt joy that many believe those with my type of autism are unable to experience. Everyone in the world deserves to be truly seen and heard including those like me who don’t communicate through traditional methods.

Three years ago, I began to tell my own story spelling my inner thoughts one letter at a time. This past year has been a turning point and has been particularly monumental as I’ve had a chance to expand my advocacy work, strengthen friendships and start to have a chance to think about my future.

Last year at TASH I described how my external behaviors were not a reflection of my internal cognitive state. With the reputation of TASH behind me I know my words reached more people than they would have otherwise. I was heard by strangers for the first time and it gave me hope for the future and validated my belief that I could help others who have autism and remain silent. Having a chance to participate in the conference was life changing and I am honored to be here again today.

Let me briefly tell you a few of the meaningful interactions that have transpired since.

Last spring, I was invited to go to the Lieber Institute for Brain Development in Baltimore and talk to several experts about my autism and the disconnect between my brain and my body. This was a thrilling experience. They asked many questions and it was one of the happiest days of my life because they were interested in what I was saying and sat so attentively as I slowly typed my answers.

I described for them my response to stimuli, much like I described in last year’s talk. They wondered how I learned so much about different subjects and I explained that I am always listening to conversations, and that my parents read to me a lot. They asked what my first memory was and I told them of a weekly gym class I used to attend in Boston—I hated the noise, couldn’t do what the other kids were doing and I saw the worry on my mom’s face. We talked about what I knew about my diagnosis of autism. I remember being in a doctor’s office and they asked me to do exercises I couldn’t do. I heard the doctor say I had PDD and I didn’t know what that meant. Soon after, I heard the term autism and realized it must be bad because everyone talked about it in a whispering voice. I understood that I fit the criteria of someone with autism after the second or third time I was tested.

I hope to continue the conversation with open minded scientists and educators, as well as the skeptics and those who disbelieve and I hope this helps to reshape the thinking of those in influential positions.

This tremendous experience with the Lieber Institute confirmed that I want to be an advocate for others with autism.

It is my hope that those younger than I will benefit from the talks, social media posts and in some cases heated exchanges that my friends, family and advocates have endured in attempts to obtain a reasonable education or be included in a favorite activity. I feel we are making progress. My mom and I have heard from teachers and therapists asking for ways to show their students the presumption of competence when they have defiant bodies like mine. We have also heard from parents looking to try this with their kids. This is becoming my career aspiration. I would like to be a teacher and help schools reconstruct how they deliver curriculum to kids who are non-speaking.

Another highlight was being invited to talk to my teachers at a school staff meeting. The people that work at my school are forward thinking, tolerant and patient with my autistic outbursts. For this I am grateful. I was able to respond directly to their questions about how to include me in classroom discussion, assist with peer interaction and tell them it is easier for me to stay engaged if the curriculum moves faster and with greater depth. School is not perfect but the staff at my school are a great group of educators.

Another bright spot was writing a toast for my sister at her Bat Mitzvah. My sister believes in me with an intense ferocity. Being able to show how deeply I believe in her in front of all her friends and our family did not change that love and free flowing faith but it did give those in the room a chance to be part of it. I know growing up with a brother with autism has a unique set of challenges. To have the focus be on her alone on her special day and be given the chance to tell her friends how great a person she is was one of the greatest joys. And when I get the chance to let my words be heard I know that I have gotten a step closer to another side of me being seen and shared, and that is everything.

While much of my past year was filled with new and positive experiences, the day to day can be exhausting and I’ve had some struggles also. I have to put on a brave coat of armor each day as I brace myself for the expected and unexpected challenges associated with my autism and people’s response to me.

I have experienced bullying this year and it has shaken me. Another teen has been verbally abusive and tried to harm me physically. This is upsetting for many reasons. Particularly upsetting was the notion that some thought I wasn’t that bothered about it because I didn’t act like it bothered me. I didn’t have the expected motor response and didn’t defend myself. This again was a disconnect between my internal state and my behavior.

It is also difficult and never easy to be a teenager. The hardest part of being a teen is that even without autism I would still be judged for a bunch of other reasons. Pressure seems to be harder to live up to each day. We want to be cool, we want to be seen as intelligent, we want to be seen as attractive, and sometimes we just want to not be seen at all. I feel these wants as strongly as anyone.

Last year I spoke about my behaviors and how difficult it was sometimes for me to control my external output. I thought it might be useful to help others not just understand what I’m feeling but also perhaps how to respond.

Here are few examples into some of what I experience daily and some responses to think about:

So, what’s next? I know the next chapters of this book will continue to be about breaking stereotypes and preconceived notions.

My dream is for fewer and fewer people to need to hear my story and for them not to be surprised at what I’m saying. I’m hopeful that I’ll be able to go to college, graduate with a degree in a major I really enjoy, and be able to find a job where my differences are valued, not judged. I’ll know this current book is complete when people see me as a full person, without defining me as an autistic or as someone to pity. I’ll know it’s complete when those with great spirits and unique minds are no longer judged or face obstacles put in place by others who lack knowledge and understanding. For now, along with my autistic friends, I’ll keep fighting, hoping, educating and striving to spread awareness about who we are—complex books with many chapters, that no single cover could ever fully describe.

This blog post has been posted as part of TASH’s Communication for All campaign. Learn more about the campaign at www.tash.org/cfa.