Marie is a 55 year old woman, who lives in her own home in Maine. In this picture, she is boating with friends on Big Narrows Lake where she spends time every summer near her hometown of Lincoln. Life wasn’t always this blissful! When Marie was only 11 years old she moved out of her family home and into a children’s institution in Maine. She lived there until age 18, when she was relocated to an intermediate nursing care facility (ICF) for people with disabilities. While at this facility, she began attending a segregated day program for adults with disabilities. Unfortunately, her time in this program was short lived because Marie developed severe self-abusive behaviors. She was terminated from the day program and her family was given notice that she was being terminated from the intermediate care facility as well. Because she no longer had anywhere to go during the day, Marie was in the ICF all day and night, with no outside interaction, which left her feeling lonely. Her behavior deteriorated, and Marie and her family had run out of options. Plans were made to admit Marie into a state run institution for people with disabilities. That’s when Katahdin Friends, Inc., (KFI) was called in to help, and when Gail Fanjoy, CEO was first introduced to Marie and her family.

Because Gail was a member of TASH, KFI benefited from the shared values, experiences, and knowledge of fellow TASH pioneers. TASH helped “set the stage” for what was to become for many people, including Marie. KFI believes, as does TASH, that everyone has the right to live in a home of their own, develop their own personal rhythm and routine, and live a life filled with valued roles – with the right type and amount of supports. In 1991, KFI had some experience supporting people whom they knew well to move out of foster homes and family homes into their own homes, but not people with very complex challenges like Marie.

When Gail met Marie she was wrapped tightly in a thick white blanket with heavy padding wrapped around her arms and hands. Marie did not use words to communicate and her caretakers did not pay much attention to her rudimentary signs nor did they understand her wants and needs. Her frustration was expressed in self-harm. Marie’s self-inflicted wounds covered her body with bruises, scars, and fresh bite marks. She wore a helmet and took various medications that did little to stop her violent outbursts. At a dangerously low body weight, the ICF diagnosed her as “failing-to-thrive.”

Almost immediately, Gail noticed the lack of understanding the facility’s staff had of Marie and her behaviors. She was fed the same thing every day; a sandwich, tossed salad, and a glass of milk. During Gail’s first lunch with Marie, she noticed that Marie would eat the single red tomato on top of her salad before becoming uncooperative and refusing to eat.  When Gail suggested that the caretakers use tomatoes as positive reinforcements, she was met with blank stares. The staff had been using Fruit Loops as reinforcement for Marie even though she showed no interest in the cereal. Gail also noticed that Marie had a love for coffee and pointed this out to the staff. However, they continued to make Marie repeatedly sign for it before ever serving it to her.

Although KFI was not equipped with specialists such as psychologists or speech therapists, Gail knew that if Marie were to gain more control over her own life, her self-abusive behaviors would begin to fade. After spending nine months focusing exclusively on Marie’s wants and needs, her likes and dislikes, and getting to know her on a more personal level, Gail along with Marie, her family, and the facility’s team decided that it was time to make the move from the ICF. On July 2, 1992, Marie moved out of the facility and into her own home. Marie and her new staff team threw away the facility’s behavior plan and set up positive goals for her future, with the most important goals being safety and happiness. As her team continued to study her behavior, they noticed that Marie never bit herself when she was taking baths or getting her nails polished, so they began including these activities in her daily routine. Overtime, Marie felt comfortable enough in her own home that she asked for less restrictive blankets and wrapping. She also began to communicate more frequently and effectively. Still in love with coffee, she taught her team signs for the things she loved and made it clear that her life include: pasta, pizza, the sounds of children playing, head rubs, her mother, sleeping in late, the TV show “McIver”, and men! In her own home, Marie was safe and happy. 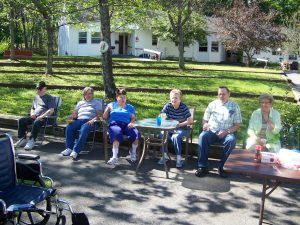 Now, more than two decades later, Marie is still living in her own home. She lives in a low income housing area and has many close friends and neighbors. She frequently has guests come over to her apartment and loves sitting at her picnic table with her cup of coffee. Marie and her staff drive her neighbors and friends to the grocery store, church, and community events. In turn, Marie is invited over for meals and social activities, fulfilling her once lonely void. The blankets Marie once used for security are now a thing of the past. Though Marie still likes to be swaddled before bed, she no longer needs the wrap in order to feel safe or to go out.

Marie is a member and active volunteer at the Lincoln Key Club. Whenever she wants to go to the club, she takes out her iPad and points to a photo of one of the club founders or just hands her staff some jewelry or hair spray so her team knows to take her there. She has become very particular about her appearance. Marie regularly attends church and is an active participant at the local Music Jams. Marie’s mother now admits that Marie’s social life is more active than hers.

Marie’s life is completely in line with the Maine’s 1915(c) Home and Community Based Services Waiver. She receives both paid and unpaid support, all from caring people who support her to take control of her own life, make her own decisions, and best of all, feel safe and happy.

Do you have a story like Marie’s to share? Email balvare@tash.org to submit your story. Stories must be 300-400 words, submitted as a Word document, and are subject to approval.  Join the campaign and share.