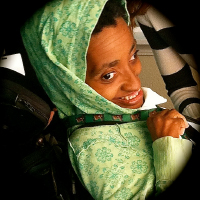 Sharron has been living independently for about 10 years now and with the help of her support team she has been able to grow and become more independent as time continues. Over this 10-year period, she has made personal strides to help her team better understand the word “support” and to utilize the technology that was made available to her in order to better communicate with all of the people in her life. Using an iPad and various apps, Sharron is able to express her wishes and is able to input all of her information independently, allowing her to effectively and efficiently communicate with those around her. But it was not always this easy. Before the iPad was made available to Sharron she was using a device called the Dynavox that required special programming that was not accessible to her or easy to understand. Now that Sharron uses the iPad, she hopes that it may be helpful to others in her position and help them to avoid some of the same frustrations she had in the past where people assumed she had nothing to say because she could not effectively communicate. Although the iPad is not covered by insurance, Sharron still recommends it and says that with a little savings it is affordable. She hopes that insurance companies will soon start to cover the costs.

Yolanda, Sharron’s roommate for the past 9 years, says that living with Sharron has taught her to learn the true meaning of support and encouragement. She also says that Sharron has encouraged her to step outside of herself and find the commonality in everyone, as equals who deserve respect. Although she has worked for many companies, Yolanda says that working with Sharron has been very rewarding and that it’s a privilege that someone would choose to share their life with her. Sharron and Yolanda’s coordinator, Joy, says that working with Sharron has taught her a lot. She describes the experience as “switching from a PC user to navigating a map” in that it involves a lot of unlearning and starting over. Joy also says that although she works with a variety of people who have hugely different lives, she and Sharron are “ fundamentally…two women wanting to be accepted for who we are, not what others want us to be, and we are in this fight together.”

Throughout her life, Sharron has fought an uphill battle with her cerebral palsy. She uses a powered wheelchair and struggled to find an effective means of communication for quite some time. However, she has been able to overcome the odds and has been living independently for the past decade. She says “I’m really proud to be a part of an organization that believes in helping individuals use their own voice and wishes to build a life that is satisfying and contoured to individuals’ needs…I have learned so much and I am still learning more every day. We never stop growing. I’m just grateful that I have all the tools needed to reach higher and grow stronger.”

Together Kirk Hinkelman and Scott Shepard share voices of the people they support in the TASH 40th Anniversary Book. Here you can learn more about Sharron and her journey to discovering a voice in this world. Copies of the anniversary book are still for sale at a reduced rate. 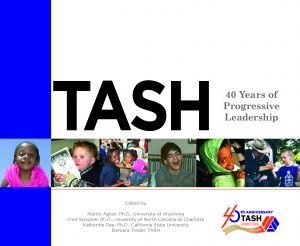 Do you have a story like Sharron’s to share? Email balvare@tash.org to submit your story. Stories must be 300-400 words, submitted as a Word document, and are subject to approval.  Join the campaign and share.