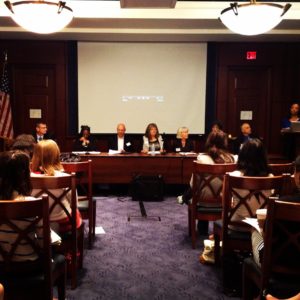 TASH’s Executive Director, Barbara Trader, along with filmmaker, Dan Habib, kicked off the Congressional Briefing with an introduction to restraint and seclusion featuring highlights from the movie, Restraint and Seclusion: Hear Our Stories.  Senator Chris Murphy, co-sponsor of the Keeping All Students Safe Act (S. 2036/H.R. 1893), then joined the group to stress the importance of passing this bill.

“Going to school shouldn’t hurt,” said Paula Buege, advocate and mother of Donovan Richards.  Paula and Donovan travelled from Wisconsin to the nation’s capitol to share their story and speak out against the physical and mental abuse occurring in schools.  Donovan, a 20-year-old young man, spoke about his near daily subjection to restraint and seclusion in his early years in school and the long-lasting impact of the trauma.  Paula and Donovan joined panelists Mazen Fawzy, Tonia Ferguson, and Dr. Joe Ryan in sharing their stories.

Dr. Joe Ryan, Professor of Special Education and Associate Director of Research for the School of Education at Clemson University described the act of restraint and seclusion as insanity, or Einstein’s definition of it; doing the same thing over and over again and expecting results.  He shared his research with attendees proving that restraint and seclusion does not work to change behavior.

The harmful use of restraint and seclusion is a pervasive, nationwide problem.  Federal legislation is essential to provide children in all states, including schools operated by the Department of Defense, equal protection from these dangerous techniques.  Currently, the Keeping All Students Safe Act (S. 2036/H.R. 1893) has 40 co-sponsors in the House and 4 co-sponsors in the Senate.  Attendees were asked to encourage their Representative, Senators, and even bosses to co-sponsor the bill and help protect all students nationwide from restraint and seclusion in schools.

You can do the same!  Call the U.S. Capitol switchboard (202-224-3121) to speak to your Representative or Senators today!  For more information on restraint and seclusion visit stophurtingkids.com.