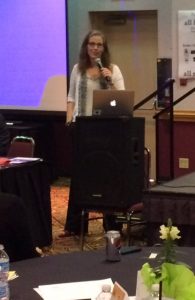 This past Saturday, the parent-driven, best practices initiative in pursuit of an inclusive, civil society-profit, All Born (In), held its annual conference in Portland, Oregon. Tugging the heartstrings of many, TASH’s Jenny Stonemeier discussed the importance of social relationships, especially for those who find themselves on the margins of our society. Jenny, education policy director of TASH and The SWIFT Center, focuses her efforts on implementing school wide inclusive practices that will improve academic and behavioral achievement for ALL students.  She will present at this year’s TASH Conference in Portland, Oregon.  To learn more about the TASH Conference, visit www.tash.org/2015TASHconf

“I was asked to be a part of this key note panel to talk about what’s happening in education policy at the federal level.  And while the actions that the House and Senate are taking to reauthorize the Elementary and Secondary Education Act are incredibly important, those action are far too narrow of a context for me right now.  We have a universal context that we need to address.

Right now, I’ve been finding myself thinking about Freddie Gray, who died in police custody on April 19th—a week after being arrested.  Mr. Gray was a young black man who lived his entire life in Baltimore—a city that is racked by systemic failures that led Mr. Gray’s mother—a woman with a disability—to become addicted to heroin.

These systemic failures led Mr. Gray to grow up in a house that exposed him and his sisters to enough lead paint to suffer significant neurological damage because of the toxicity, that left them with cognitive impacts including serious struggles in school.  I don’t think that we can know how many young people across our country could tell a similar story.

Freddie Gray’s story is one that we have heard all too often.  Freddie died while in policy custody from a “severe neck injury.”  Yesterday, the Baltimore City State’s Attorney announced that charges would be filed against the 6 police officers who were involved in his arrest and subsequent handling.

So, I’m having a hard time talking about federal education policy because we have a serious, pervasive, and persistent crisis of context happening right now; a crisis and a context that involves so much more than education.  It is a crisis in the way we view each other, and interact with one another.  It’s a crisis in how we view ourselves, and our responsibilities as humans.  Without over-stating, I believe this is a crisis of our humanity.  It is a crisis of not taking a thoughtful look at how our systems work to support and perpetuate these tragedies.

“Fixing” ESEA is not going to remove lead paint from children’s homes, or heroin from their neighborhoods.

“Fixing” IDEA is not going to bring communities together to engage in the incredibly brave—and difficult—conversations about bias and equity.

Writing federal regulations on discipline codes is not going to end the criminalization of behavior, it will not keep children of color, children with disabilities, and children living in poverty from being systematically funneled in to the criminal justice system.

I believe that we have the power and the tools to fix these circumstances ourselves by engaging in conversations, and as David Pytoniak so vividly described for us this morning, by nurturing and fostering the social relationships that we are hard-wired to engage in.  Those relationships—that when we fully engage in—allow our own anxieties to settle.

We have to have these conversations with friends and lovers, strangers and family members, at the kitchen table and the coffee shop and in our spiritual homes.  We need to step into communities that we don’t consider “ours,” we might need to make ourselves uncomfortable, in order to have these conversations.  But we must talk about what is REALLY happening in our world.  More importantly, we must listen.

I am the Education Policy Director at TASH, we are a 40 year-old national disabilities advocacy organization that is founded on the principles of social justice.  At TASH we work every day to insure that our “systems” are set up to facilitate the full citizenship of every single person with a disability, especially those with the most significant disabilities—those who are the most vulnerable to institutionalization, neglect, and abuse.  TASH’s mission is entirely coupled with the mission of All Born (in) and I’m excited to mention that TASH will be hosting its annual conference in Portland this December.

All of these potential policy changes are incredibly important for every single student, without question!  But today, in this deeply powerful community that we have come together in, I want to remind you, encourage you, implore you to engage in fixing these circumstances in your own communities, by doing that thing that we are made to do—engage in a social relationship with people.  That is where our power lives.  That is where we can affect the most good.

When my son—who experiences autism—was 7, he gave everyone in the family super-hero names.  Mine was Locater—because everyone in my house loses things, and I’m the one who finds it all.  When my man-child gave me my super-hero name, he said to me—with all seriousness— “use your power for good.”

So, as part of saying thank you to All Born (in) for inviting me here to speak, I say to all of you, “Use Your Power For Good.”  It’s the greatest thing we can do!!”