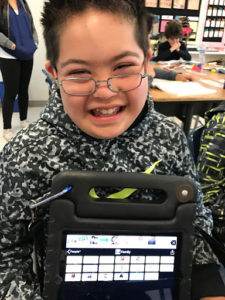 Pablo Garcia is a 6th grade student who has been a full member in his inclusive school community in Woodland Hills, California since kindergarten.  The mindsets of his teachers have focused on his strengths, while continuing to develop his competence in clearly expressing himself to others in his community.

Pablo began kindergarten able to verbalize four words: “yes,” “no,” “Mom,” “bus” (which meant “school”). He was immediately interested in his peers and wanted to engage with them, which he initially communicated by pulling their hair. We introduced an iPad with the app Proloquo2Go in the winter of his kindergarten year, which allowed him a much wider range of communicative output than his oral musculature was able to produce at the time. The program had jokes, his favorite people, and many ways to invite his friends to interact with him. We focused on teaching him to use this new system by ensuring that the iPad was always available to Pablo, using it for all communicative purposes (e.g. academic, wants/needs, establishing friendships), and modeling how to get to the different pages. With the availability of more communication tools, the hair pulling immediately stopped and Pablo was able to show off his athletic skills, humor, and engage more fully in the curriculum. In first grade, the curriculum involved an increased emphasis on writing and spelling. Pablo received a wireless printer so he could build sentences in Proloquo2Go, print them out, and use the symbols to read his work.  It was clear that the ability to print, read his work, and turn it in with his friends gave him true pride and authorship.

As with any student, collaboration with his family was a critical component of his communication journey. Pablo comes from a bilingual Spanish/English household, so communication was always provided in the family’s preferred language (sometimes English and sometimes Spanish). His family supported communication by providing photographs of him at home so he could share about his family at school, and learning about his AAC system while continuing to support all modes of communication. His school team was invited to, and attended special events in his life, such as birthday parties and his Confirmation ceremony. The trusting relationship developed between home and school has allowed Pablo’s team to ensure that his communication supports grow and change along with him, and that he can communicate effectively in all settings where he participates. 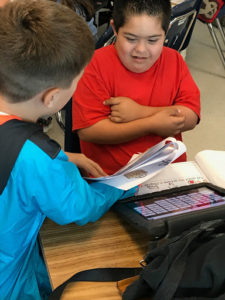 Flash forward: Pablo is now in sixth grade and known by his peers for playing tricks (he loves to “psych” people), being a star on the soccer field and basketball court, being a reliable group member in class and being a focused artist. Pablo uses a combination of Proloquo2Go, sign language, and verbal language (which has increased dramatically over the years) to share knowledge, interact with peers, and express his personality.

As a new middle schooler, Pablo is now focused on learning school systems and routines along with his 6th grade classmates. So far, Pablo’s favorite subjects in school are science and his Crafts elective. During Science, Pablo enjoys learning new concepts along with his peers and plays an active role in lab inquiries. His elective class is giving him exposure to a range of creative activities including weaving, painting, drawing and other crafting projects. Like most students his age, Pablo has had a range of career goals, but is currently interested in learning more about the job of a police officer.

For more information on TASH’s Communication for All Campaign, please visit https://tash.org/communication-for-all-campaign/.